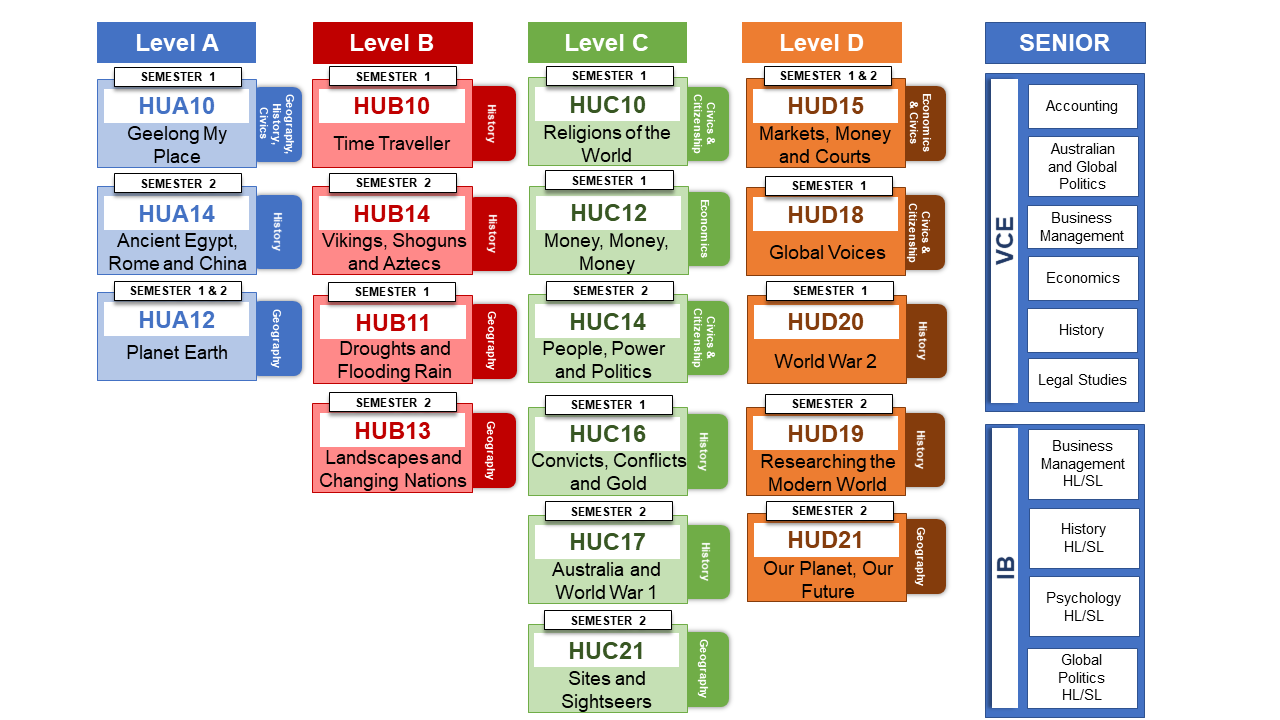 This unit comprises a study of a wide range of sociological, historical and geographical features of Geelong and the surrounding region. The development of a wide range of geographical skills is undertaken enabling examination of Geelong and its surroundings to occur. The unit concentrates upon experiencing Geelong’s historical, industrial and tourist development. Students gain greater insight into their local community, develop research skills and explore the unique history of the Geelong region.

HUA11: Into the Unknown

This unit involves both an historical and geographical study of a number of new frontiers. The unit explores the objectives, experiences and means of exploration by Europeans of the “new world” between the 15th and 19th centuries. There is a focus is on the European discovery of Australia and the inland exploration of the continent. A study of the exploration and habitation of Antarctica is also undertaken. The last frontier, the universe, is the final area of study within the unit.

This unit focuses on two central geographic themes: Water in the World and Place and Liveability. The development of a wide range of mapping and research skills is initially undertaken to enable a detailed examination of the oceans and continents. The unit then concentrates upon water as both a resource and a habitat. Students go on to examine why Australians live where they do, and investigate the connection between place and liveability. The unit’s activities involve students reviewing sources and extracting key relevant material on a topic. Students are required to revise and extend map construction and interpretive skills.

This unit studies life in the ancient world, with a particular focus on three societies. It begins with an overview identifying important features of the period from approximately 60,000 BC to 650 AD. Through depth studies on each of Egypt, Rome and China, the unit examines the evidence for the emergence and establishment of ancient societies (including art, iconography, writing tools and pottery), as well as important features of ancient societies (such as farming, trade, social classes, religion, rule of law). An underlying thread through all content areas is the development of key historical skills that are central to all studies of History.

This unit enables students to explore aspects of civilisation through the ages. It begins with an exploration of the concept of chronology and the identification of the stages of human prehistory and history. Students investigate the changing nature of Domestic Life, Travel and Transport, Crime and Punishment, and Health and Hygiene in a comparative study of life from Medieval to Modern Times. Students identify and evaluate the lasting contributions of each era. Use is made of a wide range of resources from artefacts and modern objects to written sources and electronic resources.

This Geography unit begins with a study of landscapes and their landforms. It develops students’ understanding of the concept of environment and enables them to explore the significance of landscapes to people, using studies drawn from Australia and throughout the world. With a focus then on Changing Nations, the course proceeds to investigate the changing human geography of countries, as revealed by shifts in population distribution. A framework for developing students’ geographical knowledge, understanding and skills is provided through the inclusion of inquiry questions and specific inquiry skills, including the use and interpretation of maps, photographs and other representations of geographical data.

This unit identifies and examines important features of the period 650 to 1750 AD. The course begins with a general overview of the transition of societies from the ancient world to the modern world. Three depth studies form the basis of the course content. Viking societies and conquests are examined. Shogunate Japan is studied in relation to the organisation and decline of its society. The Aztec society is investigated with attention to both its traditional form and to challenges faced with the Spanish conquest of the Americas. An underlying thread through all content areas is the development of key historical skills that are central to all studies of History.

HUC10: Religions of the World

In this unit, religions are those forms of belief and practice through which human beings express their sense of ultimate reality. Such beliefs and practices form an important part of the experience of human beings, and this experience is both individual and collective as religions are formed and understood by individuals within religious communities. This unit is designed for all students interested in the great questions of life. It also seeks to develop understanding and respect for the perceptions of the participants in religious traditions, and thus values and promotes open inquiry without bias towards any one tradition in particular.

No matter who we are or what we may do, the way we deal with our personal finances is very important. This unit aims to encourage students to investigate the world of finance and banking. It also provides an introduction to the knowledge and skills required to operate as an informed consumer within the commercial world. In particular the unit examines topics such as investing, borrowing, budgeting, credit, consumer rights, taxation and basic record keeping.

This unit begins with a study of the need for laws and the types and functions of government as an introduction to a study of the Australian Parliamentary System. This particular study covers the development of Australia’s government from colonial autocracy to federal parliamentary democracy. It examines the executive, legislative and judicial processes at the three levels of government – federal, state and local. Finally the role of the individual citizen within the electoral system is examined as well as the major political parties.

This unit examines the early history of Australia in the context of wider world history. The influence of the Industrial Revolution on both the slave trade and on the general movement of people is a starting point with an ensuing focus on the convict era and free settlement in Australia. The impact of settlement is examined, including the effects on the migrants themselves and in terms of the impact upon Aboriginal people. The experiences of other non-European groups were also significant during the colonial era. The gold rush is regarded as a defining moment in Australia’s history and is a key focus of this course.

This unit focuses on two significant events: the making of the Australian nation and World War 1. The course begins with the rise of nationalism that led to Federation in 1901. The changing world of the early 20th Century provides a segue into a depth study of World War 1. The causes of the war are analyzed and an investigation of the course of the war and its impact is undertaken. Australia’s ‘baptism by fire” into the war at Gallipoli is studied, along with the involvement on the Western Front and in other theatres. The effects of World War I are examined, in terms of political, economic and social consequences.

This unit focuses on two central geographic themes. The first theme is how we connect with places. Geography is the study of people and their connections with places. The way we interact with places is dynamic: we changes places and places change us. There are many different perceptions of what a place is like, how it is used and how it can be improved. Finally, the unit looks at the theme of being ‘on the move’. Millions of tourists are on the move every day. So this unit explores where do they go and what influences their choices, what positive and negative impacts they have on the places they visit. There is also a specific exploration of the concept of ecotourism.

This unit involves an investigation of man’s use and management of natural and human resources. It looks at economic choice and opportunity cost in relation to resource allocation. It investigates the different types of environments which exist in Australia and the impact of human choices and activities on those environments and the effects of natural disasters on the environment. Coursework includes research activities and an investigation of resource use in the local area.

This unit encompasses the themes of economics, the law and citizenship. The unit serves as an ideal introduction into the major commerce areas studied in the senior years; namely Legal Studies and Economics. Specifically, the course will examine the following topics: national & global economic issues; associated political decision-making; as well as the legal framework, focusing on contemporary legal issues in Australia. Values and attitudes are also explored to assist students to make considered decisions about present and future financial and civic responsibilities. This will provide students with the knowledge, skills and opportunities to be a responsible citizen.

This unit covers the concept of internationalism. Key political figures and their roles on the world stage are studied. It examines the concerns and challenges facing the United Nations such as Terrorism, Civil and Human Rights and Global Warming. Students analyse the impact of terrorist attacks in recent years. The end of the Kyoto Protocol and the failure of the Copenhagen conference are also examined with respect to the future management of the world’s environmental challenges.

This Level D History unit has two distinct aims: (i) to provide students with an historical study of post-1945 society; and also (ii) to develop the vital skills of research and essay-writing in preparation for VCE and IB studies. The course begins with an overview of the modern world and Australia since the end of World War 2, including the importance of the Cold War and the issue of rights and freedoms. The globalizing world is then examined via depth studies on Popular Culture and Migration Experiences. This overview leads into extended historical research on a selected topic and the subsequent writing of a major research essay.

This Level D History unit focusses on the causes, course and impact of World War 2. It examines the aftermath of World War 1 in terms of international relations, as well as the impact of the Great Depression and the rise of totalitarian states. The course pivots on World War 2 – in terms of political, economic, social and military themes. Students develop valuable skills in historical research, analysis and writing as the course progresses to look at the eventual end of World War 2 and the impact this had on lives, nations and the world.

HUD21: Our Planet, Our Future

This unit provides an overview of the environmental functions that support all life, the major challenges to their sustainability, and the environmental world views – including those of Aboriginal and Torres Strait Islander Peoples – that influence how people perceive and respond to these challenges. Students investigate specific environments and environmental change in Australia and beyond. Students will apply human–environment systems thinking to understand the causes and consequences of the change and geographical concepts and methods to evaluate and select strategies to manage the change.