A VCE program is a set of semester units studied over a minimum of two years. Such a program is designed to meet a student’s needs within the rules laid down by VCAA and school policy. 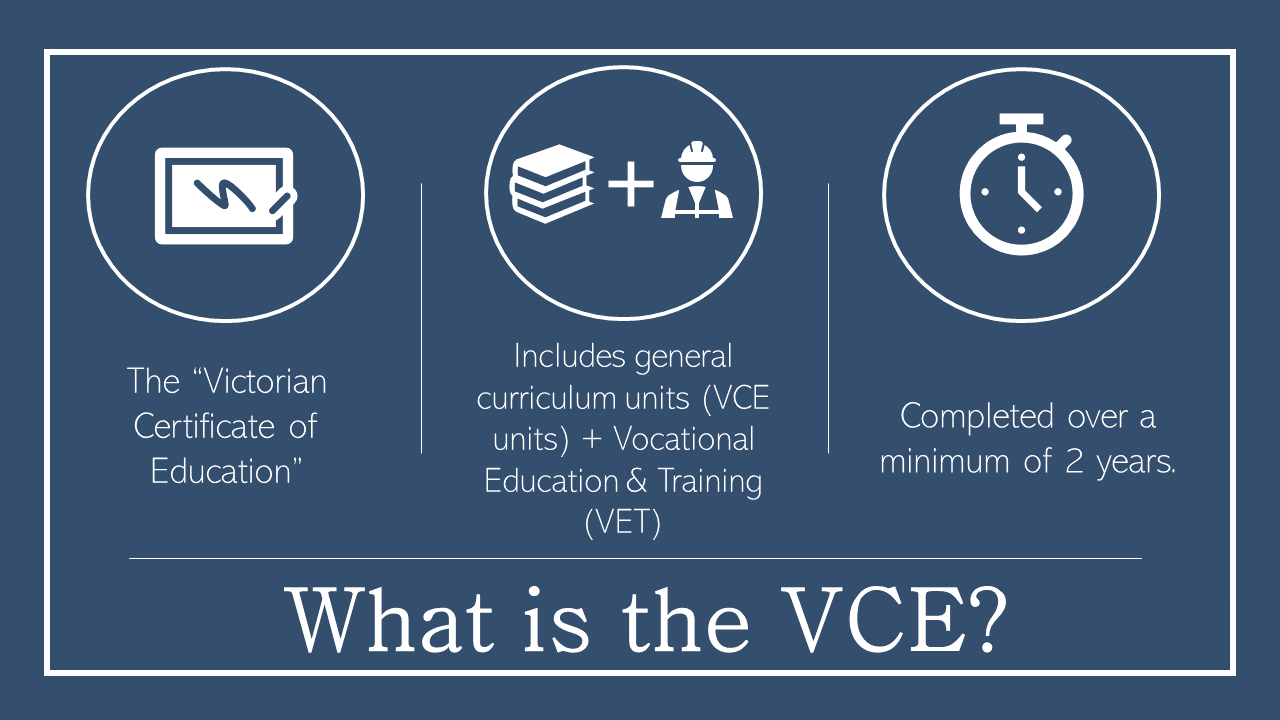 To meet the graduation requirements of the VCE each student must satisfactorily complete a total of no fewer than 16 units.

Satisfactorily completed units must include:

There are two kinds of assessment in the VCE; external examinations and school assessed tasks, every study in the VCE has a mixture of external and school assessment. The assessment for VCE studies will consist of school-assessed coursework, where each of the learning outcomes can be tested by a variety of means within the normal context of classroom instruction and at least one of the assessments in a study is formal examination externally set and marked by the Victorian Curriculum and Assessment Authority. The school-assessed coursework marks will be statistically moderated against examination performance in both the formal study examination and, where appropriate, performance in the General Achievement Test (GAT). For those studies which maintain a product as part of the school-assessed course work (e.g. Studio Arts, Product Design, Media etc.) the school assessment of the product will be monitored against performance in the General Achievement Test. 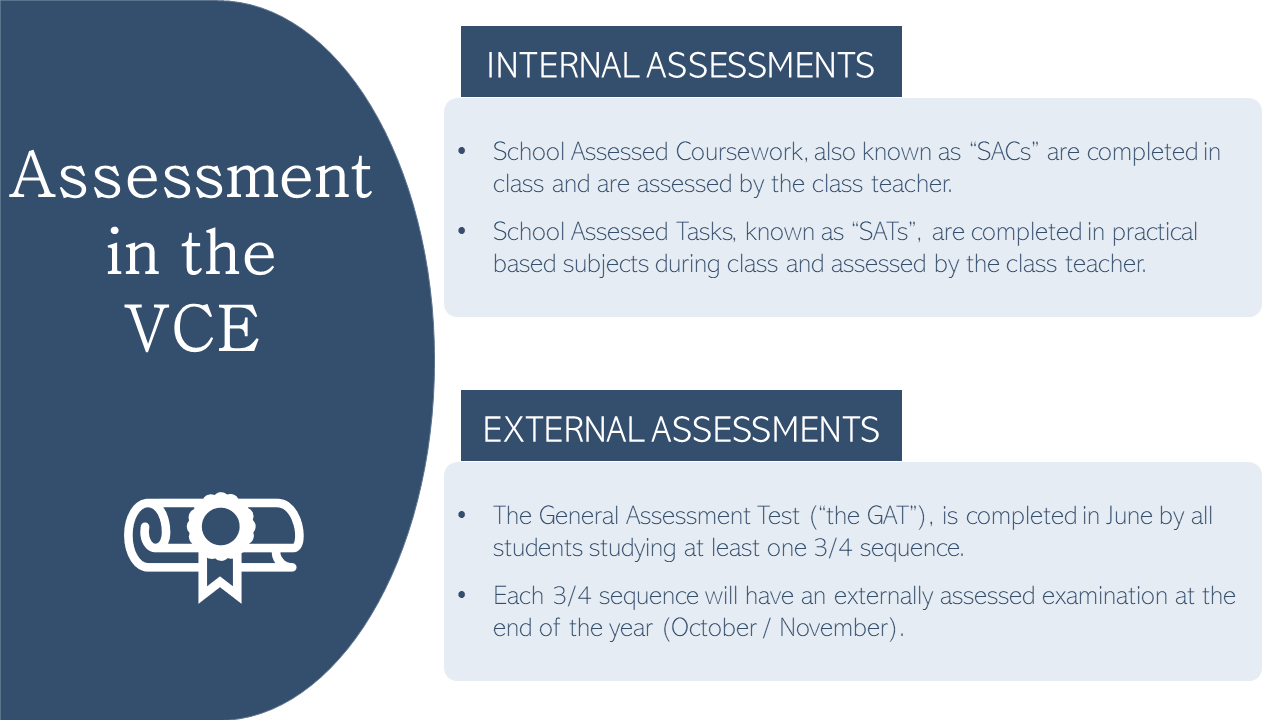 The General Achievement Test (GAT) scores and the VCE study score. The GAT scores are derived from student performance in the GAT, which all students will sit mid-year. The purpose of the GAT is to give the VCAA a means of monitoring the consistency of school assessments across the State.

The VCE study score is derived from the sum of the student’s performance in all the assessments in a particular VCE study, and adds a further important dimension to reporting on individual student achievement.

In addition, students will receive; separate from their VCE results, an Australian Tertiary Admission Rank (ATAR) from the Victorian Tertiary Admissions Centre which will be used for tertiary selection. The Tertiary Entrance Rank is designed specifically for use by universities for selection into their faculties.

The General Achievement Test (GAT) is a test of general knowledge and skills in writing, mathematics, science and technology; humanities, the arts and social sciences. Although it doesn’t form part of the graduation requirements for the VCE and doesn’t count towards the VCE results or ATAR, the GAT is an essential part of VCE assessment procedures. It is used by the Victorian Curriculum and Assessment Authority to check that all schools are marking to the same standard in their school assessments. It is used for this purpose because GAT results have proved to be a good indicator of results.

The GAT is also used by the Victorian Curriculum and Assessment Authority to check its own marking of school-assessed work and of examinations. These checks are an important part of ensuring that the VCE is fair to everyone. Therefore, if you are enrolled to do Units 3 and 4 of any study – whether in Year 11 or Year 12 – you must sit the GAT unless the school Principal exempts you. There must be a good reason for this.

VTAC may use the GAT score as part of the middle band selection procedures for some courses at some institutions.

The advantage of the VCE study score is that it combines information about all the assessments and about the performance of the student relative to all other students. For the study scores, the State average has been set at 30 out of 50 so employers can see at a glance where the student stands in relation to others in the State in that study.

The VCE study score will be reported alongside the individual letter grades on the Summary Statement of Grades. The individual Examinations and School Assessed Coursework grades will continue to give users of the Certificate an indication of the strengths and weakness of students in particular kinds of tasks. It will also help in the transferability of results among institutions and among the different states and territories. 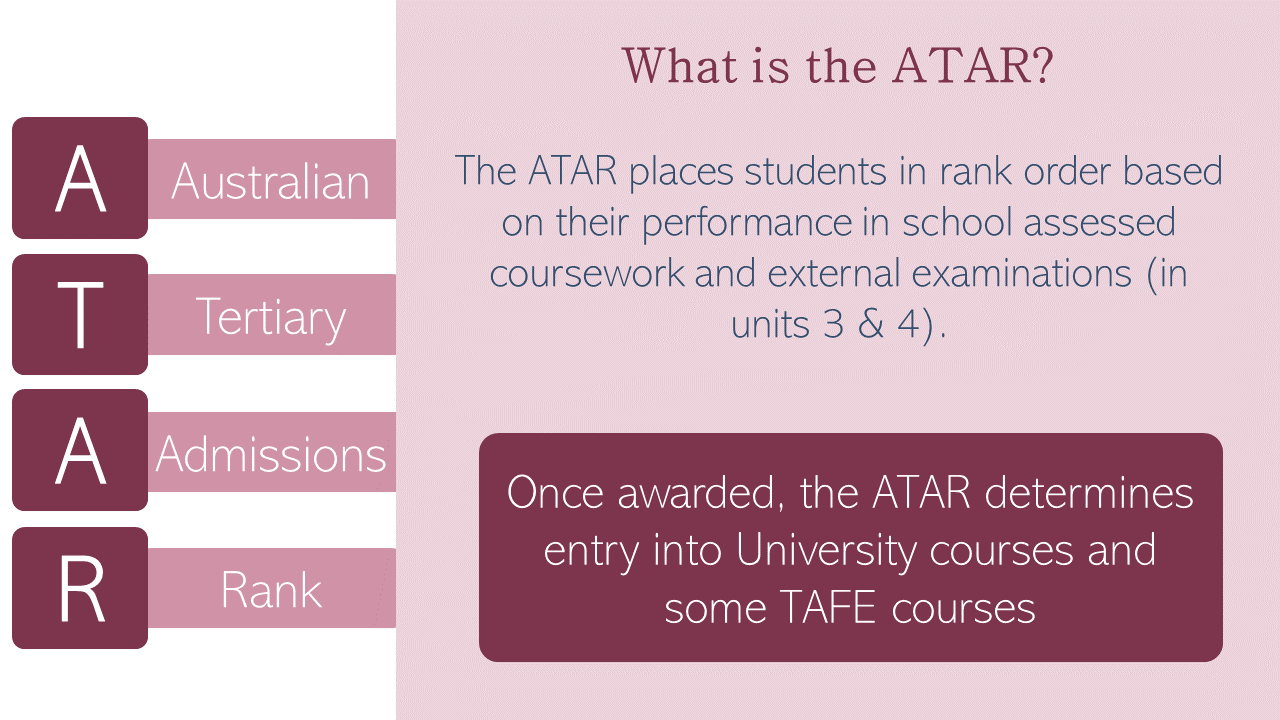 The Australian Tertiary Admission Rank (ATAR), is calculated by the Victorian Tertiary Admissions Centre (VTAC) from the student’s Study Scores for Units 3 and 4 VCE studies. It is the primary means of deciding which tertiary courses the student will be offered. Unlike the Study Score, the ATAR is a means of comparing students across studies, rather than within them. By doing this, it can give an overall account of student ability, which has proved a reliable indicator of how likely students are to complete tertiary courses.

The cross-study comparison of students involves a statistical treatment of each student’s Study Scores; after which these can be added in a simple way to derive each student’s ATAR. 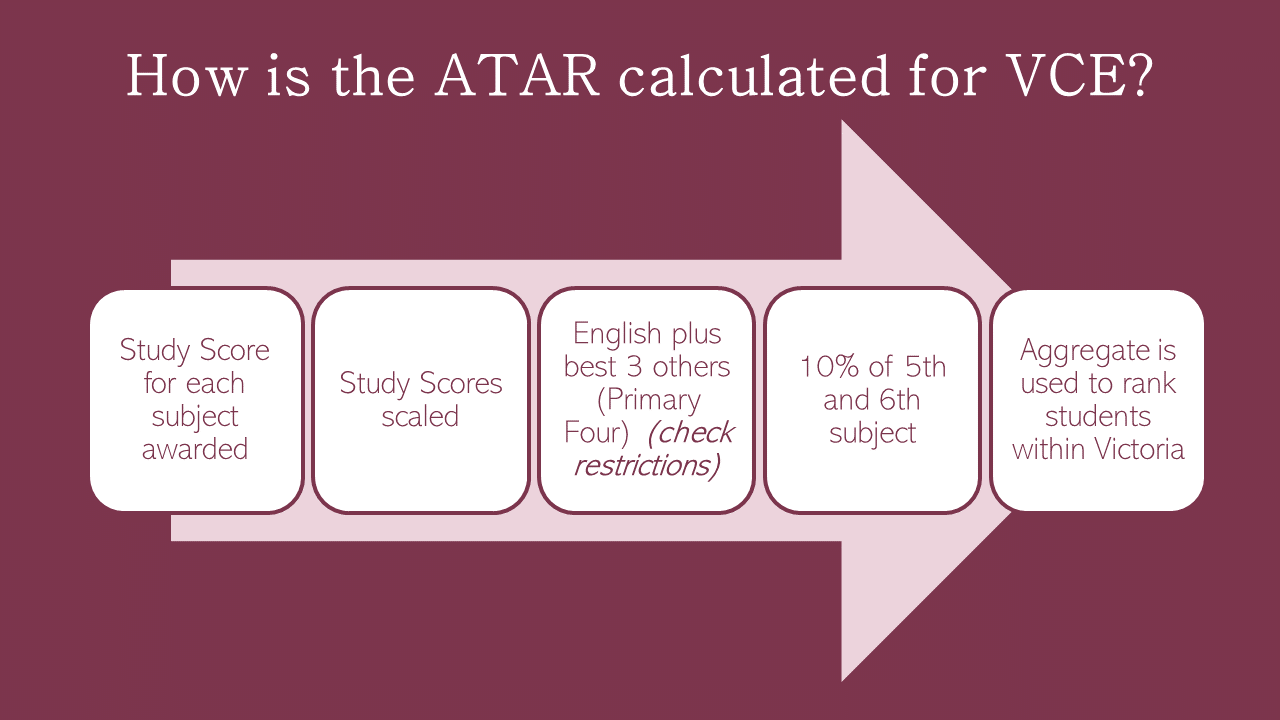 Central to the statistical treatment of study scores is a process known as scaling, which is a way of acknowledging the degree of competition in each study. The degree of competition in a study is judged by looking at the total performance of the group of students taking that study; that is, the performance of that group of students in all the studies in their programs compared with their performance in that study. If this reveals that a particular study has students with a markedly high performance in all the studies in their programs, then the competition in that study was clearly very great. Therefore, all the Study Scores for that study might well be scaled upwards.